An Interview with Father Peter 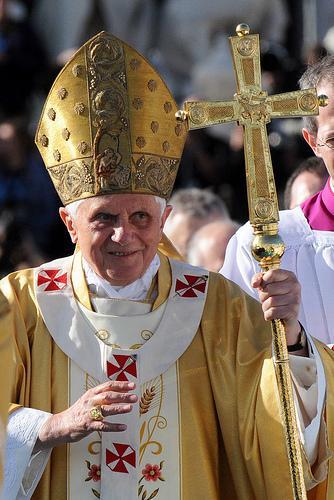 Following the news that Pope Benedict is resigning, we interviewed Father Peter to hear his views and to learn what will be happening in the Vatican at this very important time.

Q: What was your reaction to the news that the Pope is resigning?

Fr. Peter: At first I felt sad because it is hard for a pope to retire. Then I felt admiration for him because he made this hard decision for the good of the church.  He knew we needed someone to take the church forward. I felt proud of his humility.

Q: Do you think we will get a younger Pope?

Fr. Peter: It is possible. There are some younger cardinals. Cardinal Ouellet from Quebec is in his 60s and so is Cardinal Turkson from Ghana. He is 64. Cardinal Tagle from the Philippines is only 55. There are a few in their mid-60s.

Q: What will happen when the Pope retires?

Fr. Peter: The Pope will retire at 8 o’clock on the 28th February. He will then go to Castle Gandolfo, the Pope’s summer residence for a while. He will return to the Vatican, but not to the palace where the Pope lives – but to a convent that has been converted.  He will live in it like a monk lives in a cloister. The day he leaves office, he is no longer Pope. His ring will be destroyed.  It will be as if he has died. He will not be seen in public. This hasn’t happened in a long time so we have to get used to it.  The new person will be the new Pope and he will have everyone’s loyalty and support.

Q: Has he made the right choice?

Q: How do they choose a Pope?

Fr. Peter: When the Pope resigns on the 28th of February, we will no longer have a Pope. Someone will take over the day to day running of things. 118 cardinals will be voting. You cannot vote if you are over 80 years old. They meet in a conclave. They will be closed off from the world in the Sistine Chapel. They will pray for guidance from the Holy Spirit and they will talk a lot to each other. The names are put in a chalice.  They will keep praying and voting until one name has a two-thirds majority.  The names are burnt after each vote. The smoke is black. When one name has the two-thirds majority, the person will be asked in Latin if he accepts the appointment as the successor of St. Peter. The person answers in Latin. If the person accepts, the papers are burnt and white smoke is seen.  All the time the cardinals pray for guidance from the Holy Spirit.

Q: How long will it be before we get a new Pope?

Fr. Peter: I think we may have a Pope for Holy Week. It is important to have a Pope to lead us through the most important week of the church.

Q: Who do you think will be the best person?

Q: Have you ever met Pope Benedict?

Fr. Peter: Never in person but I was close to him at Westminster Abbey because of my ecumenical work on Church Unity. I did meet the last Pope, Pope John Paul II and I celebrated Mass with him.

Q: If you were Pope what would you do?

Fr. Peter: I would reach out to all those who have stopped practising and engage with our young. I would support with enthusiasm all the people of God.

The whole school went on a Lenten Walkaround. Different scenes from the Lenten story were set up around the school and the children walked around the scenes listening to and reflecting on what happened at this important time of year.

Family and friends joined the school community for an Easter walkaround. We visited different parts of the school and learnt about the Easter Story. Thank you to all those who came and a special thank you to our Year 3 children for their super acting.

We had a wonderful time crowning Our Lady. Family and friends supported the children in this wonderful celebration. Infant children brought flowers and plants and Junior children wrote prayers.

Tommy brought the bell to school as part of its pilgrimage to the Eucharistic Congress in Dublin on 10th to 17th June 2012. He explained all about the bell and thanked the choir for a good performance at Church. Everybody got to ring the bell and received a prayer card. Thank you Tommy.

Unfortunately not the ones with chocolate chips.

Some cookies are necessary in order to make this website function correctly. These are set by default and whilst you can block or delete them by changing your browser settings, some functionality such as being able to log in to the website will not work if you do this. The necessary cookies set on this website are as follows:

Cookies that are not necessary to make the website work, but which enable additional functionality, can also be set. By default these cookies are disabled, but you can choose to enable them below: